Olha was born on May 3, 1927 in the city of Lviv in the family of Volodymyr Ohonovskyi and Nataliya (Prystay) Ohonovska.

Olya Ohonovska studied in the elementary school at the monastery of the Basilian Sisters in 1933-1939, which, like the monastery itself, was contained in the building No. 103 in the then Pototsky street  (later Pushkin, now General Chuprynky), where now one of the buildings of Lviv Forest Engineering University is situated. Teachers were Basilian sisters. The boys studied at this school for 4 years, the girls finished there 6 classes. The first teacher was Mother Isidore, who taught children for 4 years, and in the 5th and 6th grades various teachers taught separate subjects: mathematics, Ukrainian language and literature, Polish language and literature, geography, singing, religion, etc.

Later the girls had to continue their studies at the Academic Gymnasium; however, since September 1939, all gymnasiums were transformed into secondary schools. Olia Ohonovska was recorded in the 5th form of the school № 1. During the German occupation, two Ukrainian Gymnasium № 1 (on the basis of the Academic Gymnasium) and No. 2 were created. From the memoirs of Dariya Rudnytska-Khudyk, we learn that O. Ohononskaya was studying at Gymnasium No. 2.

After the “liberation” of Lviv in August 1944, Olha worked as a librarian in the library of the Lviv branch of the Academy of Sciences of the USSR. In January 1945 she entered the preparatory courses at the Lviv State University to complete secondary education, after which she entered the Faculty of Philology of the LSU, the English Department. Students from the English department started practicing English from practically zero, since mainly German and Polish were  taught during the pre-war times in the Lviv schools and gymnasiums, as well as Greek and Latin. English was taught by Olena Grydina and Pymen Gordiyevych Zelenskyi. The course of foreign literature was read by Prof. O. Chicherin and Associate Professor M. Shapovalova, English literature was taught by Prof. M. Rudnytskyi, the history of English and Gothic language by B. Zadorozhnyi. Olha Ohonovska’s fellow students were Dariya Rudnytska, Julia Kuzma, Olya Breslavska. In the student years, Olha Ohonovska was engaged in swimming, regularly attending symphonic and other concerts in the Lviv Philharmonic. In June 1950, she graduated from the University with honors and in 1950 – 1952 worked as a lecturer at the Department of Foreign Languages ​​at the Lviv Pedagogical Institute  (later transferred to Drohobych) together with Olha Breslavska. In February 1952 she was enrolled as a postgraduate student of the Department of English Philology of the LSU. From September 1954 to 1989 (35 years) worked at the Department of English Philology: from 2.09.1954 to 1.10.1954 half-time, from 1.02.1955, transferred to full-time after graduation 1.10.1954 p.

Theses, written and defended under the guidance of Olha Ohonovska:

Theses formulated by O. Ohonovska and defended under the guidance of other scholars:

Olha Ohonovska was an opponent of the following dissertations: 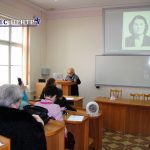 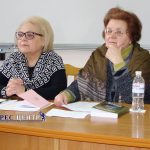 On February 22, 2018, a University scientific conference was held at the Faculty of Foreign Languages of Ivan Franko National University in Lviv, the plenary session of which was dedicated to the bright memory of the Assistant Professor of the Department of English Philology Olha Ohonovska (03.05.1927 – 05.05.1989).

Plenary Meeting of the Reporting Conference dedicated to the outstanding lecturerof the Department of English Philology in 1955-1989 Olha Ohonovska (February 22, 2017).