Join the wonderful world of theatre with Tennessee Williams’s world-famous play and faculty of foreign languages “re.Creation Theatre”. The project artistic director is V.V. Yaremchuk, PhD, the assistant lecturer of world literature department.
It may be Your chance to experience the boundaries of Your personality and talents! 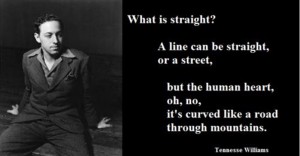 Characters and play fragments for casting

Blanche
– I, I, 1 took the blows in my face and my body! All of those deaths! The long parade to the graveyard! Father, mother! Margaret, that dreadful way! So big with it, it couldn’t be put in a coffin! But had to be burned like rubbish! You just came home in time for the funerals, Stella. And funerals are pretty compared to deaths. Funerals are quiet, but deaths – not always. Sometimes their breathing is hoarse, and sometimes it rattles. and sometimes they even cry out to you, “Don’t let me go!~ Even the old, sometimes, say, “Don’t let me go.” As if you were able to stop them! But funerals are quiet, with pretty flowers. And, oh, what gorgeous boxes they pack them away in! Unless you were there
– at the bed when they cried out, “Hold me!” you’d never suspect there was the struggle for breath and bleeding. You didn’t dream, but I saw! Saw! Saw! And now you sit there telling me with your eyes, that I let the place go! How in hell do you think all that sickness and dying was paid for? Death is expensive, Miss Stella! And old Cousin Jessie’s right after Margaret’s, hers! Why, the Grim Reaper had put up his tent on our doorstep! … Stella. Belle Reve was his headquarters! Honey – that’s how it slipped through my fingers! Which of them left us a fortune? Which of them left a cent of insurance even? Only poor Jessi – one hundred to pay for her coffin. That was all, Stella! And I with my pitiful salary at the school. Yes, accuse me! Sit there and stare at me, thinking I let the place go! 1 let the place go? Where were you! In bed with your-Polack!

Stella
– I said I am not in anything that I have a desire to get out of. Look at the mess in this room! And those empty bottles! They went through two cases last night! He promised this morning that he was going to quit having these poker parties, but you know how long such a promise is going to keep. Oh, well, it’s his pleasure, like mine is movies and bridge. People have got to tolerate each other’s habits, I guess.
– Oh, my God, Eunice help me! Don’t let them do that to her, don’t let them hurt her! Oh, God, oh, please God, don’t hurt her! What are they doing to her? What are they doing?

Stanley
– Compliments to women about their looks. I never met a woman that didn’t know if she was good-looking or not without being told, and some of them give themselves credit for more than they’ve got. I once went out with a doll who said to me, “I am the glamorous type, I am the glamorous type'” I said, “So what?”
– She’s not going back to teach school! In fact I am willing to bet you that she never had no idea of returning to Laurel! She didn’t resign temporarily from the high school because of her nerves! No, siree, Bob! She didn’t. They kicked her out of that high school before the spring term ended-and I hate to tell you the reason that step was taken! A seventeen-year-old boy–she’d gotten mixed up with!

Mitch
– It was the finest present I ever was given. I work out there with the weights and I swim and keep myself fit. When I started there, I was getting soft in the belly but now my belly is hard. It is so hard now that a man can punch me in the belly and it don’t hurt me. Punch me! Go on! See?
– I don’t mind you being older than what I thought. But all the rest of it-Christ! That pitch about your ideals being so old-fashioned and all the malarkey that you’ve dished out all summer. Oh, 1 knew you weren’t sixteen any more. But I was a fool enough to believe you was straight.

Eunice
– You can’t beat on a woman an’ then call ‘er back! She won’t come! And her goin’ t’ have a baby! .. . You stinker! You whelp of a Polack, youl I hope they do haul you in and turn the fire hose on you, same as the last time!