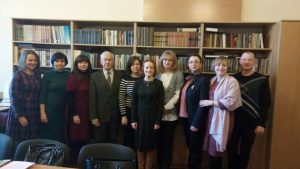 World Literature Department (initially – Department of Western European Literature) came into being as an independent structural unit of the Faculty of Philology at the end of 1939, after the resumption of the education process. The first Head of the Department (1939-1947) was a famous literary scholar, writer and translator Mykhailo Rudnytskyi (1889-1975), who specialized in Ukrainian literature and comparative literary studies. In 1944 Mariya Shapovalova (1915‑1994) started to work at the Department. On defending her PhD thesis Ivan Franko as the Shakespearean Researcher and Translator she initiated the textbook (co-authored) History of Foreign Literature. Middle Ages. Renaissance, which already exists in four editions (1982, 1983 and 2011 in particular) and is still one of the most authoritative Ukrainian textbooks in the course for the faculties of Humanities.

Since 1948 Department of Western European Literature (in 1949 renamed into “World Literature Department”) was led by PhD, Associate Professor Oleksii Chicherin (1899-1989), who later became a Professor and worked at the Department to the last years of his life. In 1957 Oleksii Chicherin defended the doctoral dissertation Epic Novel in the Literature of Critical Realism. His books such as Ideas and Style, Rhythm of the Image, Sketches on the History of Russian Literary Style, Literary Works “Gobseck” and “Lost Illusions” by Honore de Balzac appeared one by one in Moscow publishing houses during 1958-1982. They became the theoretical basis for the literary school dealing with the author’s writing style. Since 1950 the Department has been the structural part of the Faculty of Foreign Languages. From 1974 to 1985 the Department was led by a literary Slavic scholar, Professor Volodymyr Motornyi (co-author of the textbook History of Foreign Literature. Middle Ages. Renaissance), from 1985 to 1996 – by Associate Professor Albina Havryliuk. From 1996 to July 2010 Associate Professor Yarema Kravets, the researcher of Francophone literature (Belgian and Quebec ones in particular) and its relations with the Ukrainian literature, an actual member of Shevchenko Scientific Society, the author of more than 350 scientific publications, translator, member of the National Writers Union of Ukraine, was the head of the Department. Since July 2010 the Department has been led by Associate Professor, Dr Lidiya Matsevko-Bekerska (author of the monograph Ukrainian Short Fiction of the End of the 19th Century – Beginning of the 20th Century in the Mirror of Narratology). Department’s pedagogical work covers three faculties of Ivan Franko National University of Lviv where world literature courses are held (Faculty of Foreign Languages, Faculty of Culture and Arts, Faculty of Philology) as well as the courses of relevant national literatures (Faculty of Foreign Languages). Furthermore, the Department provides training of “Teacher of world literature” specialty at the Faculty of Philology and teaching of world and national literatures at the Faculty of Humanities and Natural Sciences of the Institute of Postgraduate Education. There are post-graduate studies in specialty 035 – Philology (Literature of Foreign Countries) at the Department.

The tradition of scientific forum for researchers of classical and contemporary world literature started in 1990, when, in February of that year, more than 30 literature scholars from Ukraine and Russia responded to the invitation of Foreign Literature Department to took part in the conference-commemoration of the first anniversary of the death of Oleksii Chicherin.

1997 – ІІІ International Chicherin Reading – dedicated to the research of Cervantes oeuvre, in which more than 40 researchers, including the ones from Russia and Slovak Republic, participated.

1999 – ІV International Chicherin Reading. The general topic of “Novel and Style” attracted attention of the manifold of the attendees to 200th anniversary of Honore de Balsac’s birth and a 100th anniversary of Oleksii Chicherin’s birth. 47 scholars from Ukraine, Russia, Croatia and the UK took part in the conference.

2009 – VI International Chicherin Reading – World Literary Classics in the Literary-Critical Discourse of the 21st century. Among the participants, there were the representatives of six countries – Ukraine, Belarus, Lithuania, Poland, Russia, and Slovenia.

2011 – VIІ International Chicherin Reading – World Literary Classics within “The Great Time. The scientific discussion was attended by over 120 literary scholars from Ukraine, Belarus, Moldova, Lithuania and Russia. The work of VII VIІ International Chicherin Reading (in the context of the celebration of the 350th anniversary of Lviv University) showed creative atmosphere, active scientific research in the field of world literary process investigation.

2013 – VIІІ International Chicherin Reading – World Literature in Literary-Critical Discourse of the 21st Century. Science forum brought together more than 130 literary scholars from Ukraine, Belarus, Moldova, Lithuania, Poland and Russia. The program of International Chicherin Reading initiated directions of scientific discussions, which interested the researchers of both classical literary heritage and contemporary world literature. Special page of Chicherin Reading is dedicated to the newest achievements in methodological techniques and ways of research, reception and interpretation of a literary text. There was unchanged creative atmosphere, active and productive scientific research in the field of study of world literary process.

2015 – ІХ International Chicherin Reading – World Literature in Literary-Critical Discourse of the 21st Century. More than 100 participants focused on the problems of genre versatility of literature of the beginning of the 21st century, modern methodologies of literary analysis, genealogic aspects of world literature, world literature time-spatial dimensions, interaction of literatures (influences, parallels, imitation). The scientists from Ukraine, Belarus, Moldova, Lithuania, Poland continued the tradition of creative collaboration, active and productive scientific research in the field of study of world literary process in an active dialogue.

The Department maintains regular creative contacts with literary scholars from Austria, Belgium, Greece, Canada (Quebec), Luxembourg, Poland, Romania, Russia, Slovakia, Slovenia, the USA, Finland, France, Germany, Czech Republic. The cooperation with foreign scientific research centers is implemented by the exchange of scientific production and consulting on various issues of the world literary process as well as by joint publications. Scientific projects are developed, so the Department is integrated into the European research system of problems of foreign literary studies and comparative literary studies.

Theoretical courses of the Department:

Special (Optional) Courses of the Department:

Austrian Novel of the First Half of the Twentieth Century

CONGRATULATIONS to Assistant of the Department of Classical Philology, Senior Laboratory Assistant of the Department of World Literature Savula  Andriy on successful defense of his Ph.D. thesis on "The Intensity of Aattributive Trait in Latin(on the Material of the Poetry of the Augustine Epoch)" that took place in Taras Shevchenko National University of Kyiv (Institute of Philology).

Dear Colleagues!
The World Literature Department warmly invites you to a conference – 11th International Chicherin’s Readings “World Literature in the 21st-century Literary Studies Discourse@ to be held on October 3-4, 2019.
Please send your proposals to svitlit.lviv@gmail.com. Deadline for submission has been extended until 30 July 2019.
For further information please read the information letter. Inf_de   Inf_en    Inf_fr    Inf_ru   Inf_ua